Satasarvinen (In Finnish: “Hundred Horns Hill”) view point is a hill, which rises about 70 meters above the surface of Lake Päijänne. It is known for its large boulders as well as old dead pine trees standing on top of the hill, which when viewed from a distance have looked like upright horns. There is also a small protected linden forest near Haikantie. The largest boulders have boldering (climbing) routes.
The path to the top of Satasarvinen starts at the intersection of Saaritie and Haikantie.

Haikka is a peninsula on the northern tip of Muuratsalo Island, which has a residential area. The master plan based on the grid pattern of the residential area was designed by architect Wivi Lönn in 1926. The buildings are based on the type drawings of the Finnish National Board of Settlements and Social Welfare and were completed in the 1920s and 1930s. At the end of the island road at the tip of the Haika peninsula on a small island is the Haikka sector light, which was completed in 1943.

Paljaspää (in Finnish: “Boald head”) nature trail has 10 info points, mainly telling about the nature of Muuratsalo. The path is marked with yellow paint markings on the trees and stones. The steepest turns of the route have arrow markings indicating the direction of the route.
The path forms a loop of about two kilometers, the recommended direction of rotation of which is clockwise. The trail runs mainly on dry land, so at least in dry summer weather it can be hiked, for example, in running shoes. You can get to starting point from this parking lot by going uphill through streets Teerenkuja, Yhdystie, Torikatu and Rusakontie. There is a first info point at the end of the street. A steep path to the top of Paljaspää also leads through Vuorelantie.
See the descriptions of the Paljaspää nature trail.

Kontinvuori is one of the highest points on the island, but the trees obstruct the view to some extent. There are a lot of unmarked trails cruising the hill. At the top is a mailbox where you can mark your visit in a booklet.

Velakallionlampi is a small but impressive lake under the protection of steep cliffs. There is also an informal campfire on the beach, which should take into account the limitations and responsibilities of everyone’s rights.

Naukula has a shed and a campfire site. However, bring your own firewood. The area has a pier and toilet.

Hakolanvuori is one of the highest points on the island.
There are many unmarked trails cruising the hill.
A rock formation called Tapion Alttari can be found at coordinates (Google Maps) N62 06.114 E25 44.847

Note! At the beginning of the southern ends of Muuratsalo there is a sign where landowners forbid parking by the roadside and there is also a no-parking sign at the turning point. Roads diverging from the road have also been marked as private roads where driving a motor vehicle is prohibited.

Note! When hiking in Muuratsalo, it should be noted that there are restrictions on traffic on the Lullinvuorentie (boom). Travel in the direction of Lullinvuorentie is only allowed using your own muscular forces. There are no official parking areas on the east side of the island. The parking areas on the west side of the island are shown on this map. 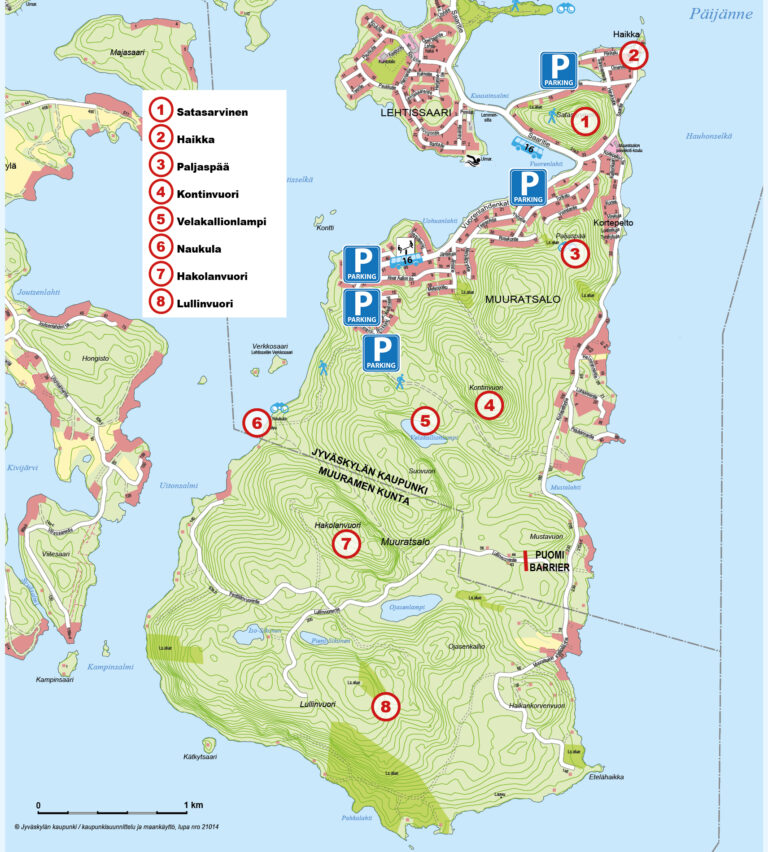